Anna Vovk started her career at the age of 14, from a maid in a real estate agency up to the top manager and then a co-owner of several large companies. Anna’s track record includes launching from scratch a service company for distribution of food products in Moscow and St.-Petersburg as well as presentation of the world-wide known brand PHILADELPHIA to the Russian market. As of year-end 2009 supplies of Philadelphia cheese to Russia were at zero level, all markets and sales channels were lost. Kraft Foods, the brand owner, invited Anna Vovk to create from scratch a distribution network and to develop the brand in the former USSR region. Already by the end of 2010 all federal districts were covered, the product was represented in all million-plus cities over all distribution channels. Philadelphia cheese became a house-hold name of cream-cheese and curd cheese in Russia like Xerox for copying machines. 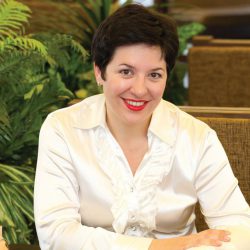 Organizing a unified distribution center of a network of entertaining enterprises and restaurants in Moscow. Year of project realization: 2002. Within 3 months turnover of USD 2 000 000 per month was routed through the system of orders via the central warehouse. The processes of orders placement, payment and goods receipt were streamlined and unified. In 6 months cost saving from the system implementation was about 15% for a similar volume of purchase. Appearance of new enterprises in the network meant their one-time entering into the system. Adaptation period: 1 month. Purchases at the market involving cash payments decreased from RUB 3 000 000 to RUB 250 000. per month. Investments into the project amounted to USD 15 000. Pay-off period: 3 months.

Starting from scratch of a service company for distribution of food products in Moscow and St.-Petersburg. Years of project realization: 2003-2008. Investment: USD 300 000. Pay-off period: 6 months. Revenue on capital in the first year of the project was 45%. Market share: 15% in Moscow, 25% in St.-Petersburg. In 3 years of the project the company gained the leading position in its segment of deliveries in HoReCa, entered top-10 list in Moscow and top-3 list in St.-Petersburg. A system of quality management was implemented. In 2006-2007 the company’s top managers acquired business education specializing in the field of Management and Marketing. A management system based on values and KPI was implemented.

Introduction of PHILADELPHIA brand to the Russian market. Years of project realization: 2009-2013. As of year-end 2009 deliveries of Philadelphia cheese to Russia from October to December were zero. Distributors lost all markets and sales channels. Kraft Foods company, producer and brand owner, invited Anna Vovk to create from scratch a system of distribution and brand development in the former USSR region. In 2008-2009 maximal deliveries volume was about 40 tons of cheese per month and 400 000 tons per year. The product was represented in retail sales mostly in Moscow and St.-Petersburg. Already by the year-end 2010 all federal districts were covered, the product was represented in all million-plus cities via all sales channels. Fila club and Grand chefs club were founded. Philadelphia cheese became a house-hold name for all cream and curd cheese in Russia like Xerox for copying machines. In 2010 sales volume amounted to 700 tons of cheese, with 40% out it accounting for retail sales channel. A series of restrictions for import of this product and resuming of shipments 9-12 months later only just proved one thing: people are ready to pay for the BRAND and vote for the BRAND. The climax of sales before the latest embargo was 300 tons of cheese per month!

Project “01 agent” for re-registration services. Years of project realization: 2009-2010. A mass service for re-registration of corporate entities was developed and implemented as a short-term project “01 agent”. Project investments: EUR 30 000. Pay-off period: 4 months. During the project, in a time span of 10 months 5 500 customers were served, and the income was USD 500 000.